The Triple Speed build kicks off 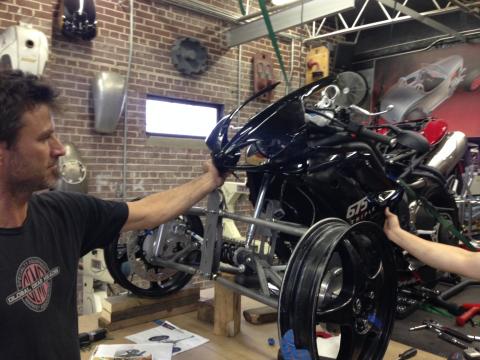 At AAPEX last year, OTC announced a partnership with Fuller Moto to build a leaning three-wheeled trike. In my Atlanta shop, my team will reconstruct a Triumph Speed Triple R to create the Triple Speed – a leaning, go-anywhere, fun to drive performance trike.

Just last week, we took delivery of the trike’s front end, and are officially starting the build. Check out the custom machined parts for the leaning front suspension in some of the photos here. Or jet over to TreMoto’s site, the patent holder for the exclusive front-end geometry and technology, to see videos of the trike in action.

Engineered by TreMoto, the patented front-end is fully customized. From the forks to brake rotors, assemblies and control arms, the trike will follow the same principles and dynamics as most other TreMoto builds, with a design twist from one of the industry’s most well-known fabricators.

This isn’t your traditional trike either. The leaning suspension gives it sport bike characteristics while the third wheel helps with stability over rough terrain without being bulky and cumbersome.

While the powertrain will stay the same throughout the build, using a Speed Triple as the donor bike means it won’t lack in power or capability, with a stock 135 horsepower from the naturally aspirated in-line 3-cyclinder. Brakes, suspension and steering components will be upgraded to accommodate for the leaning front suspension. We’ll also be using OTC’s new line of motorcycle service tools throughout the build, showcasing the line’s range and capabilities.

We’re bringing the Triple Speed to various industry shows throughout the year, with my team working on it at select shows. And of course OTC and Fuller Moto  will keep you updated throughout the build on our blog and Facebook page as the team makes progress.

So stop back each month for updates on the trike, and show us what you’ve been working on. I know we’re not the only ones with custom projects, we want to see your creations. After all, the Triple Speed came out of seeing a truly unique creation, and wanting to work with the team that brought it to market. Who knows, maybe we partner up and build your ideas next?